“DreamYoga and the Practice of Natural Light”

It has been nearly a decade since the publication of the first edition of this book, Dream Yoga and the Practice of Natural Light. Recently, Chögyal Namkhai Norbu proposed that we enhance the original version with additional material from a profound and personal Dzogchen book that he has been writing for many years. It is a great honor to edit this material since no part of this new manuscript has previously been made public. 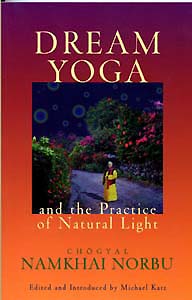 Material pertinent to Dream Yoga and the Practice of Natural Light drawn from Chögyal Namkhai Norbu’s manuscript has been translated by James Valby from the original Tibetan. This material expands and deepens the first edition’s emphasis on specific exercises to develop awareness within the dream and sleep states. Within the manuscript, Chögyal Namkhai Norbu has included specific methods for training, transforming, dissolving, disordering, stabilizing, essentializing, holding, and reversing dreams. In addition, he has presented practices for maintaining one’s practice throughout all moments of the day and night. The revision also includes a practice to develop the illusory body, methods for transference of consciousness at the time of death, and profound clear light practices for developing contemplation.

The original printing of Dream Yoga and the Practice of Natural Light is currently available in more than ten languages. Over the years, tens of thousands have read the book, and have been inspired by Chögyal Namkhai Norbu’s example and encouragement. Many have understood Rinpoche’s message about the importance of using the time spent asleep and dreaming for spiritual or transpersonal purposes. Those of you reading this book for the first time will no doubt also be inspired, particularly since the second edition includes profound new material.

Still, the habitual tendencies towards ignorance accrued over countless lifetimes are powerful. How many of us upon revisiting this text years later will see the signs of age in the mirror and not have much in the way of dream awareness to show for it. Whether or not you have read this book, it is likely that you, like myself, were unconscious in your dreams for most of the three years you have spent sleeping in the past decade.

Perhaps for you, like me, the decade has had its share of milestone events. As my infant son sleeps, I look into his peaceful face, and watch his eyelids flicker. My heart is filled with love and a desire to provide security, and I wonder if his dreams are of a previous life. These feelings and his presence, ironically, make me feel much closer to the bardos related to the transition we have come to call death.

According to the masters, progress in the practices of dream yoga and the Dzogchen practice of natural light will allow us to realize a form of enlightenment as we become lucid and aware during the moments of sleep. Conversely, continued ignorance within the states of sleep and dreaming will ensure only continued rebirth within one of the realms of samsara.

One of the important messages of Dream Yoga and the Practice of Natural Light is the distinction between the Dzogchen awareness referred to as rigpa which arises from the practice of natural light, and the more relative but still important experience of lucidity. The lucidity experience, which may arise as a by-product of rigpa awareness or spontaneously due to karmic causes, assists in understanding the unreality of phenomena, which otherwise, during dream or the death experience, might be overwhelming. In the same way, we believe a nightmare to be real, but if we were to watch a similar scene within a movie, we would not necessarily be frightened.

Great Yogis who have mastered Dzogchen awareness meditation are able to liberate themselves directly into the great clear light at the moment of death. Practitioners who have at least developed the capacity for occasional lucid dreaming may still recognize the apparitions that arise within the sidpai bardo as illusory. Reportedly, at the time of death when the mental body is uncoupled from the physical body, all experiences are magnified by a factor of seven. At these moments, according to our teachers, there is still a possibility of achieving a form of liberation.

Even a few experiences of lucidity or, more ideally, seizing upon the lucid as an opportunity to practice meditation may lead to great opportunity. Alternatively, those who fail to recognize the illusory nature of the hallucinatory visions are apparently blown by karmically induced waves of desire and fear until they are reborn in one of the forms within cyclic existence.

One should be heartened by the advanced practices described within this book. Although progress may not always be swift, it is essential that all of us look carefully at our capacity and move forward. This may entail making an effort to remember a dream for the first time, or if more advanced, transforming dreams. There are greater and greater gifts available to those who take up the practice of dream work at any level.

Within my practice as a psychologist, I have had the opportunity to travel and conduct workshops in dream work over the years. These workshops have relative goals often associated with the goals of Western psychotherapy such as understanding the unconscious and integrating that which is disowned. Additionally, these workshops have assisted in my experience of developing lucidity in dreams.

Occasionally when requested I have had to decline transmitting the practice of natural light. This practice is linked with the transmission of Dzogchen, and only a master like Chögyal Namkhai Norbu has the capacity to introduce this state of extraordinary non-conceptual awareness. I hope that, if you have not already done so, you will meet him and receive Dzogchen transmission directly from him.

The Buddha taught that every being possesses the capacity to recognize rigpa. Our obscurations cloud this awareness which, according to one metaphor, continuously shines like the sun hidden by clouds. With practice, rigpa may be accessed at any moment, even within the various stages of sleep and dreaming. It is never destroyed.

There are myriad metaphors used to explain our lack of relationship with rigpa. One of my favorites is a story about a poor peasant who had nothing and continuously bemoaned his fate. Due to his extreme poverty, he was forced to use a stone for a pillow. The irony of the story is that the stone he used for his pillow was a diamond. Here this diamond represents rigpa.

I offer a more personal anecdote on the subject. Some years ago, I had seized an opportunity to conduct a retreat so as to interrupt my busy routine and focus on the inner life. On this occasion I had arranged to conduct a “dark retreat” according to instructions by Chögyal Namkhai Norbu. Contrary to expectations, the dark retreat affords a secure and tranquil environment to practice meditation without any external light.

The dark retreat, by virtue of reducing distractions to a minimum, provides a natural opportunity to practice dream yoga and the practice of natural light. Early on during what would be a twenty-two-day retreat in the dark, I had a dream. In it I was standing on a beach near the shoreline. In the surf I saw a crystal baby being washed back and forth by the waves. Although I had little hope that the baby was alive due to its prolonged exposure to the waves and the ocean, I nevertheless rushed down to the shore and snatched it out of the water. No sooner had I cradled it in my arms than the crystal baby became animated. Its uniqueness and beauty instantly struck me.

This dream expresses a great deal about our predicament—and its solution. Distracted by the 100,000 things of the world, our crystal awareness, or rigpa, is temporarily obscured by the waves of violent emotions. Despite this, it is never destroyed and, with attention, becomes alive.

It often takes a kind of shock to stir us from our complacency and habitual tendencies. In the same way that seeing a baby being thrown by the waves of violent surf would spur one to immediate action, Dream Yoga and the Practice of Natural Light is a reminder to awaken.